NO GUTS, NO GLORY

Creating our own Bourbon has been on our bucket list since the inception of Flaviar, but we wanted to do it right. It’s been more than three years in the making, with a vision of creating something uniquely American. Countless hours went into finding the right juice, tweaking the recipe, and coming up with the identity that would represent the Spirit.

Creating our own Bourbon has been on our bucket list since the inception of Flaviar, but we wanted to do it right. It’s been more than three years in the making, with a vision of creating something uniquely American. Countless hours went into finding the right juice, tweaking the recipe, and coming up with the identity that would represent the Spirit.

Corn Trooper started as an idea of an all-American union of Craft Straight Bourbon Whiskeys. We built that alliance on a bedrock of special casks that were collected, married, and aged during our statewide quest for quality Bourbon. On this foundation, our co-founder and master blender Grisa Soba combined the motley crew of seven wildly-different Whiskeys and gave each its own voice in a delicately fine-tuned symphony of characters and notes. The main stars of the blend come from all over the country, each bringing something unique to the personality of Corn Trooper. 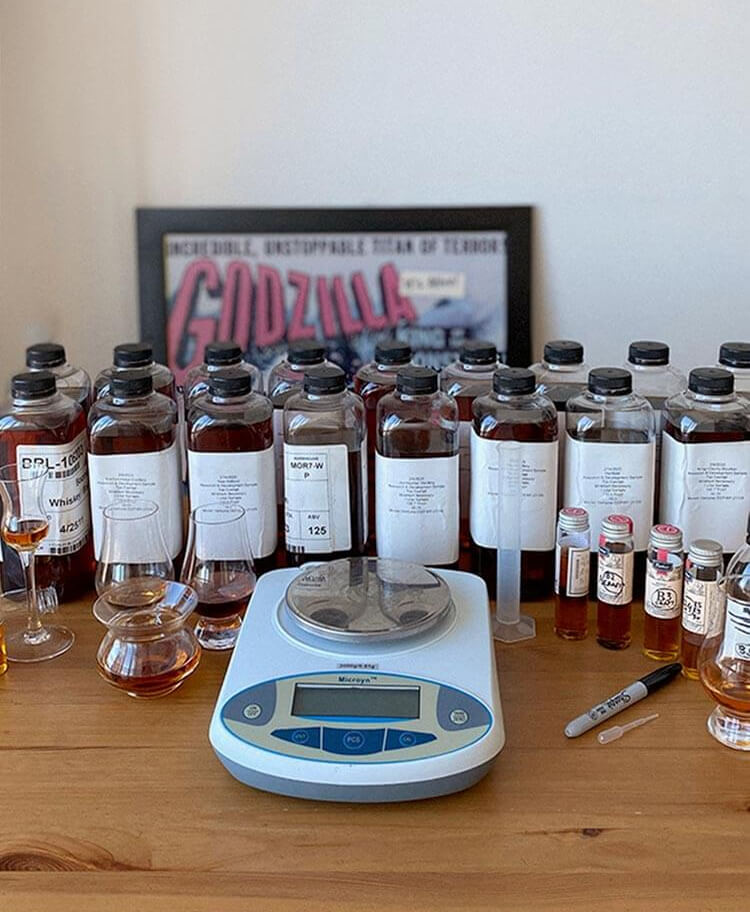 What went into the blending process

High Wire’s Spirit was created by an artisan baker. OOLA from Seattle brings high corn content, while Hartfield from Kentucky swears by more malted barley. If you ask Kings County, they go all-in with New York corn (80%). Rapid maturation under the hot Texan sun forged Balcones Bourbon, whilst Breckenridge makes their Bourbon at 2 miles above sea level. To round the posse out, we added a Bourbon finished in beer barrels from New Holland Brewing.

It took us three years to turn the idea of making the first Flaviar Bourbon into Corn Trooper. While most of the thought and expertise went into what ended up inside the bottle, a lot of creativity and tinkering was also needed for what was on the outside. Our Design Team spent countless hours and went through numerous iterations to get it right. Rumor has it they drank a hundred gallons of coffee too. Discover the story behind Corn Trooper, its symbolism, and how it got its name. 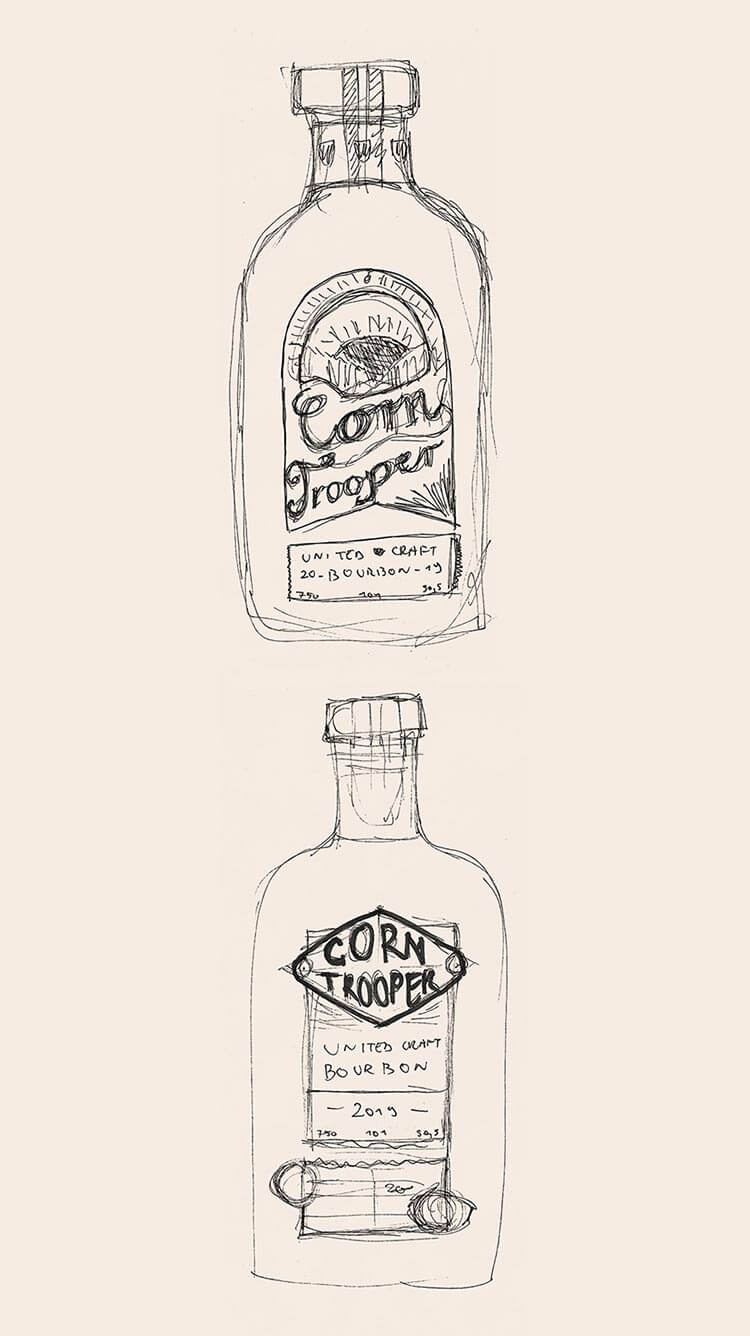 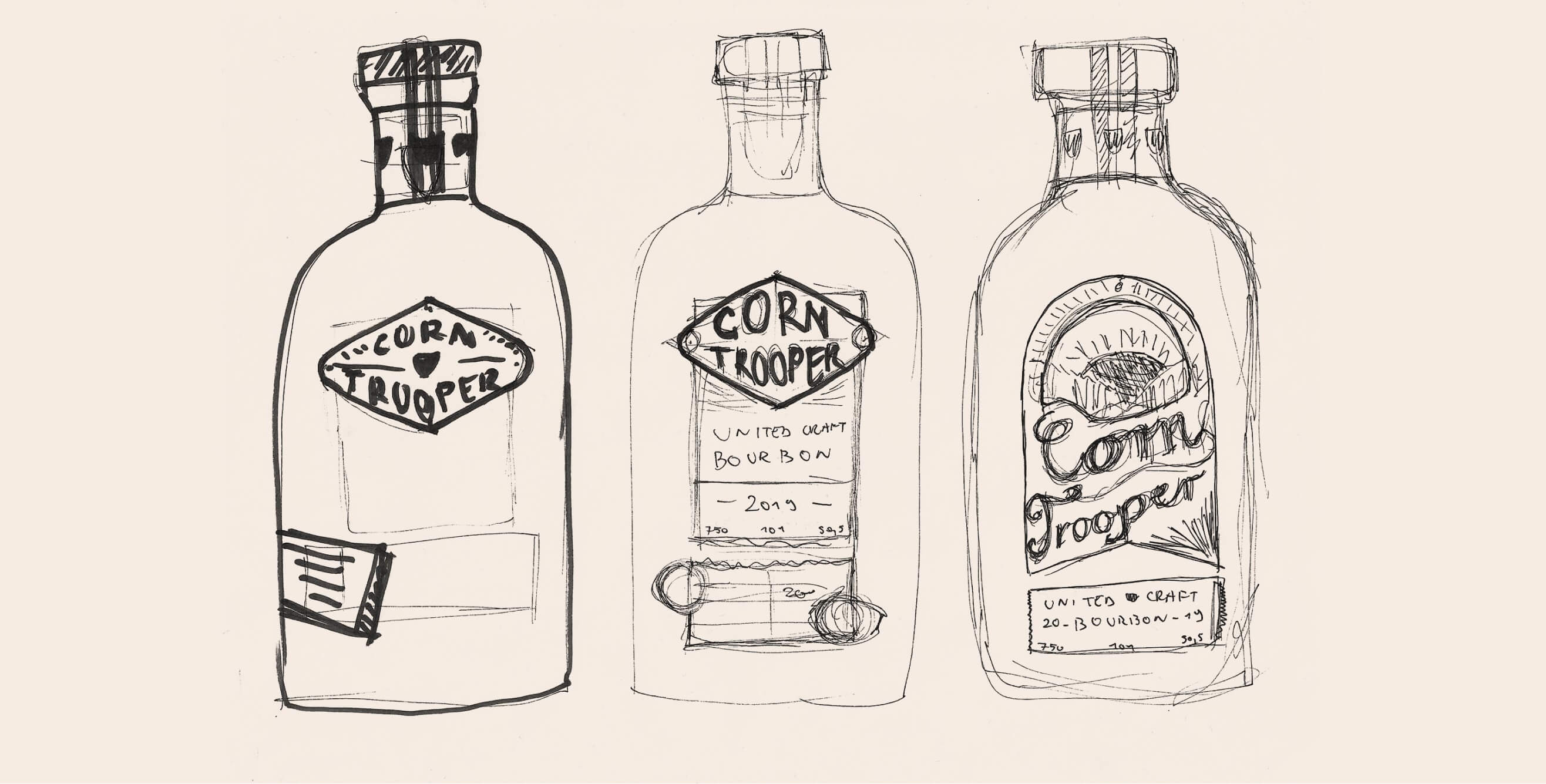 Early phase of sketches for the label

Finding a name for our first Bourbon was no joke. We asked our Flaviar members to put on their thinking caps for us, and we received more than 10,000 suggestions. And yes, we went through all of them!

There were ideas like Firewater, First Son, and Bourbon One; or pitches like Piss Ant, Bourbony McBourbonface, Rubius Dupree, or Ballyhoo and Poppycock. We considered every single idea and compiled a list of favorites. Then, after much deliberation and heated arguments, our hivemind decided on Corn Trooper. Because we love corn, the foundation of Bourbon; and because we strive to be the Guardians of Bourbon.

“There were ideas like Firewater, First Son, and Bourbon One; or pitches like Piss Ant, Bourbony McBourbonface, Rubius Dupree, or Ballyhoo and Poppycock.”

Now, the naming contest went through an online form, and literally everyone could suggest a name. Submissions came through anonymously, and when it came time to reach out to the author of the name we had settled on - boy were we in for a surprise! It turns out the call was coming from inside the house because the dude that came up with Corn Trooper was our very own graphic designer Peter! After a triple-check, we were sure it was him, and now he's swimming in Bourbon.

The label needed to clearly communicate Bourbon, yet do so in an original way. The symbolism and the idea behind Corn Trooper had to stand out: the yellow road markings represent the road that connects the seven distilleries; and that quintessential American pastime: road-tripping. The shield shape, on the other hand, stands for guardianship of Craft Bourbon while paying homage to the iconic U.S. Interstate road signs. 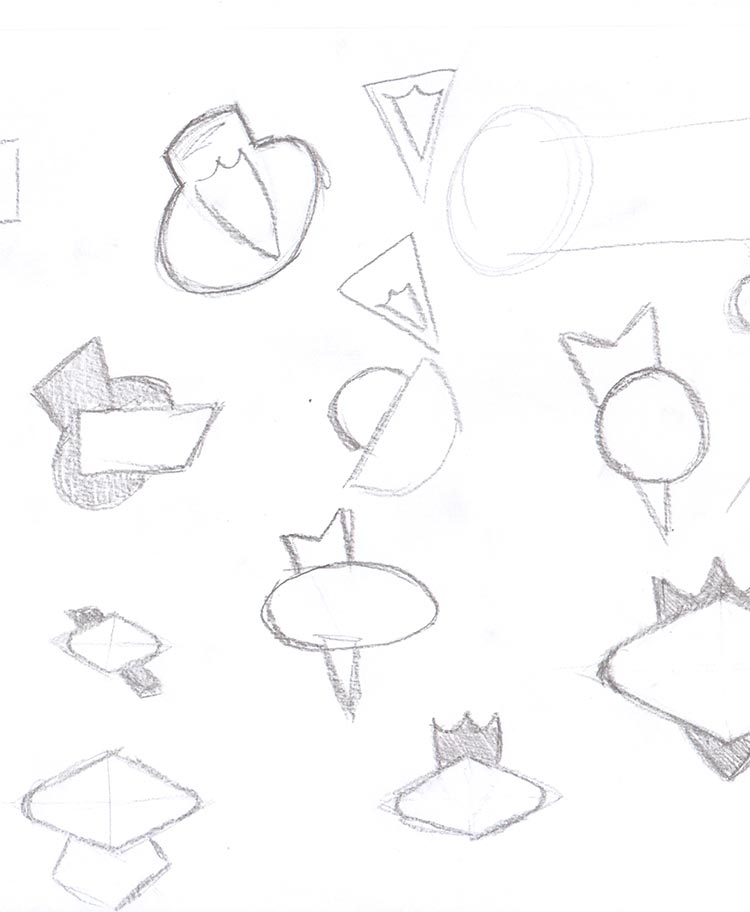 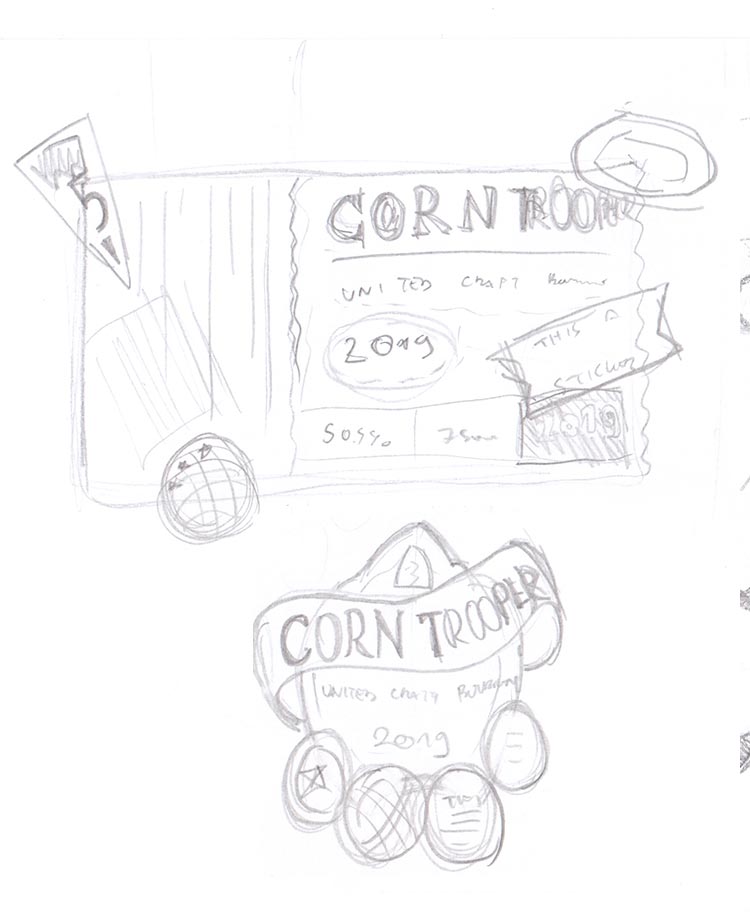 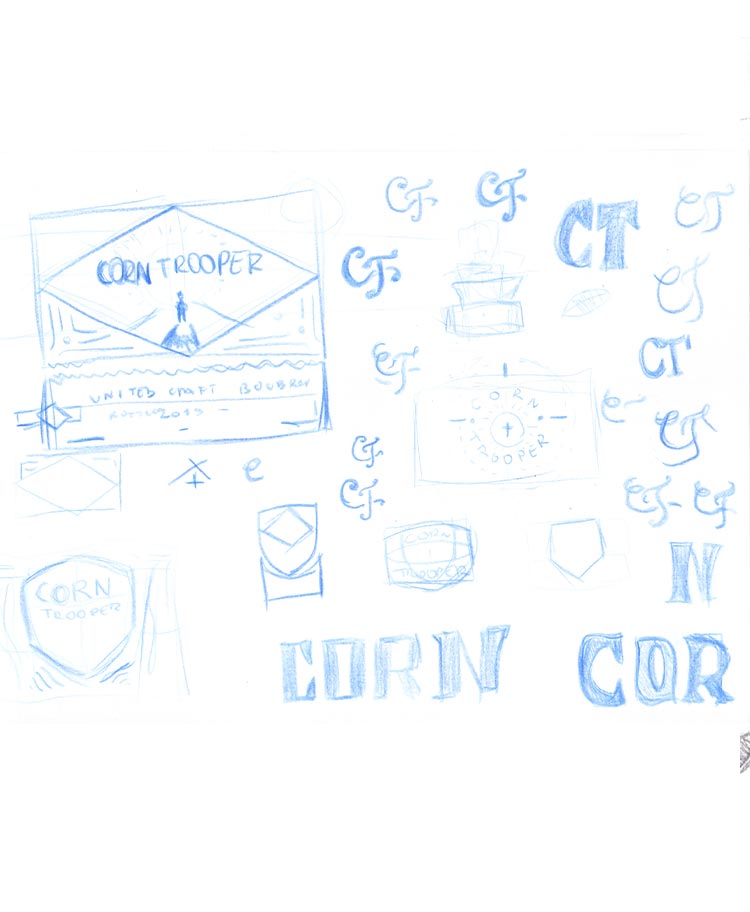 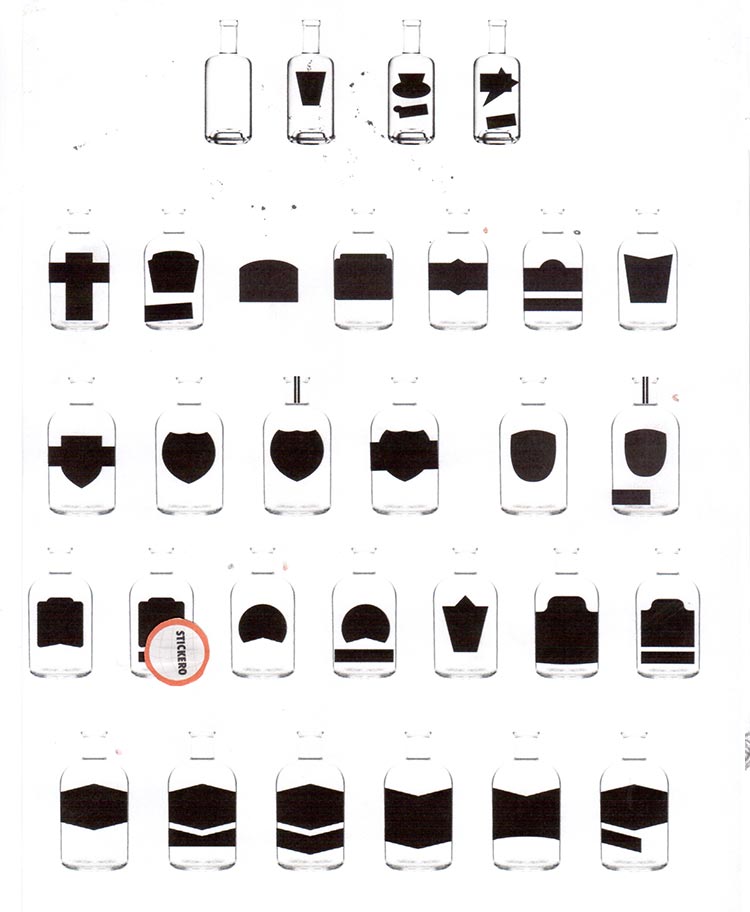 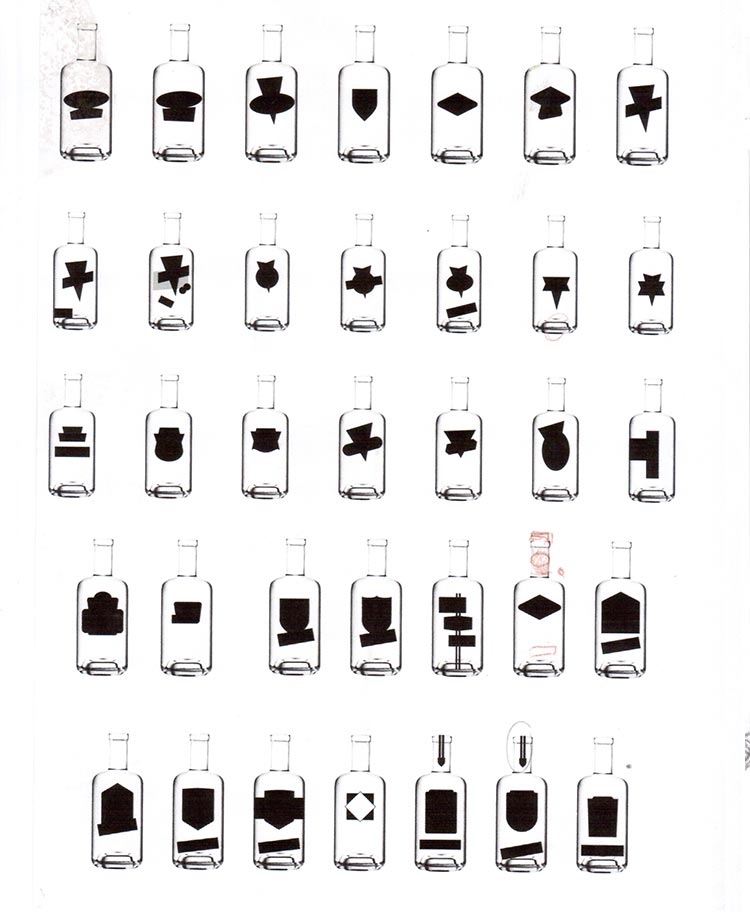 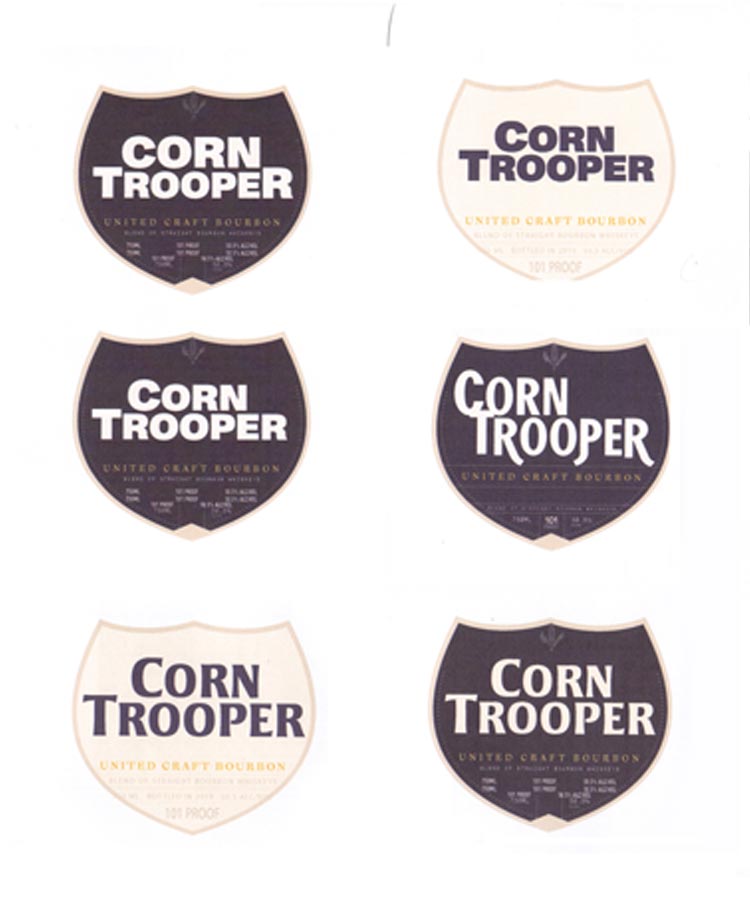 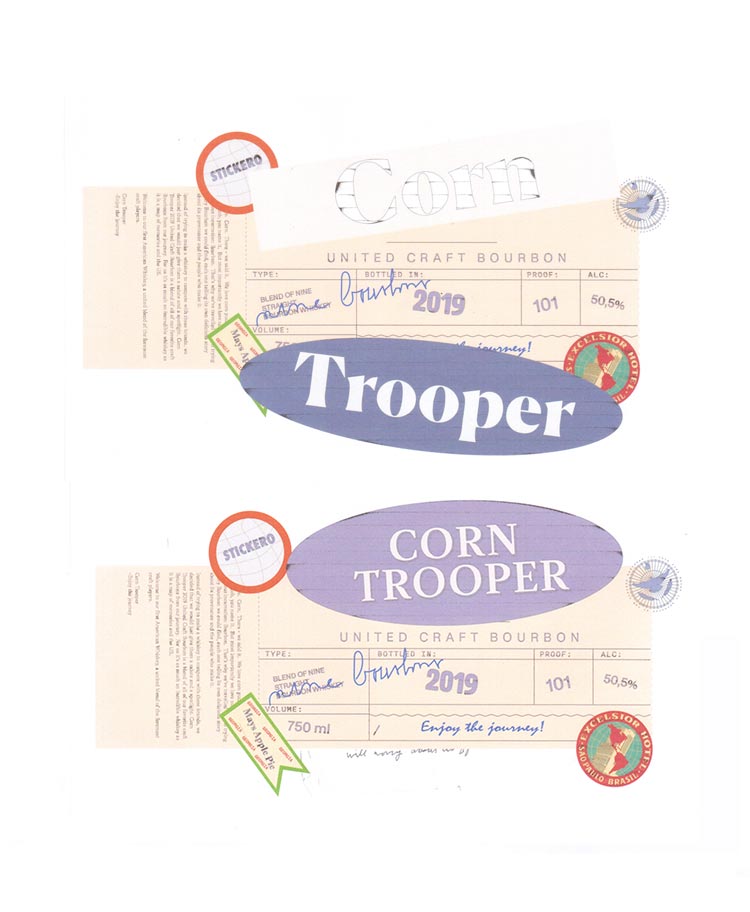 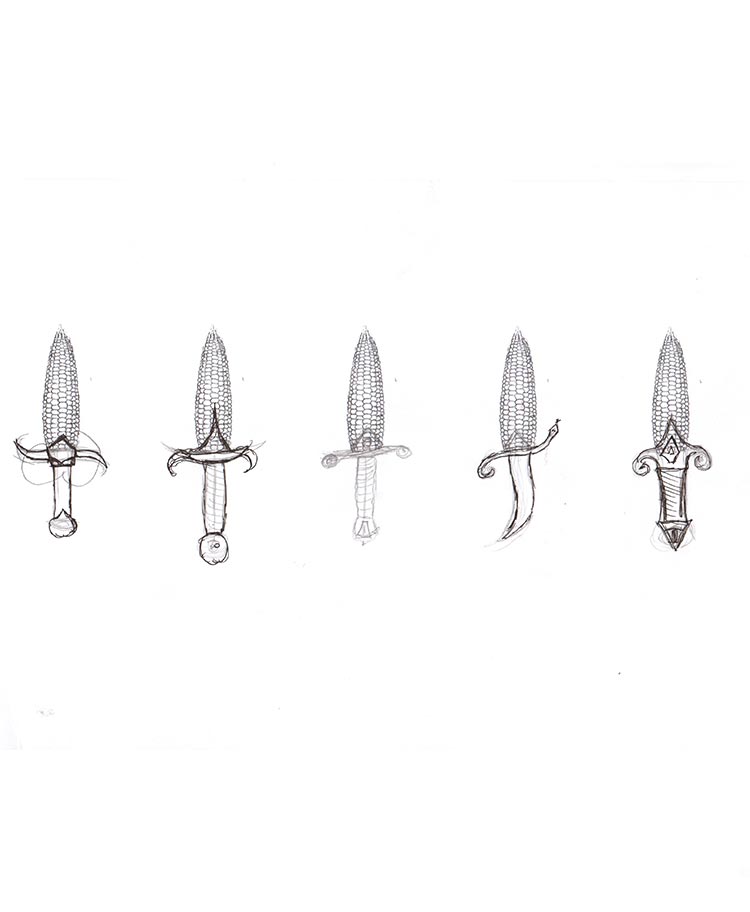 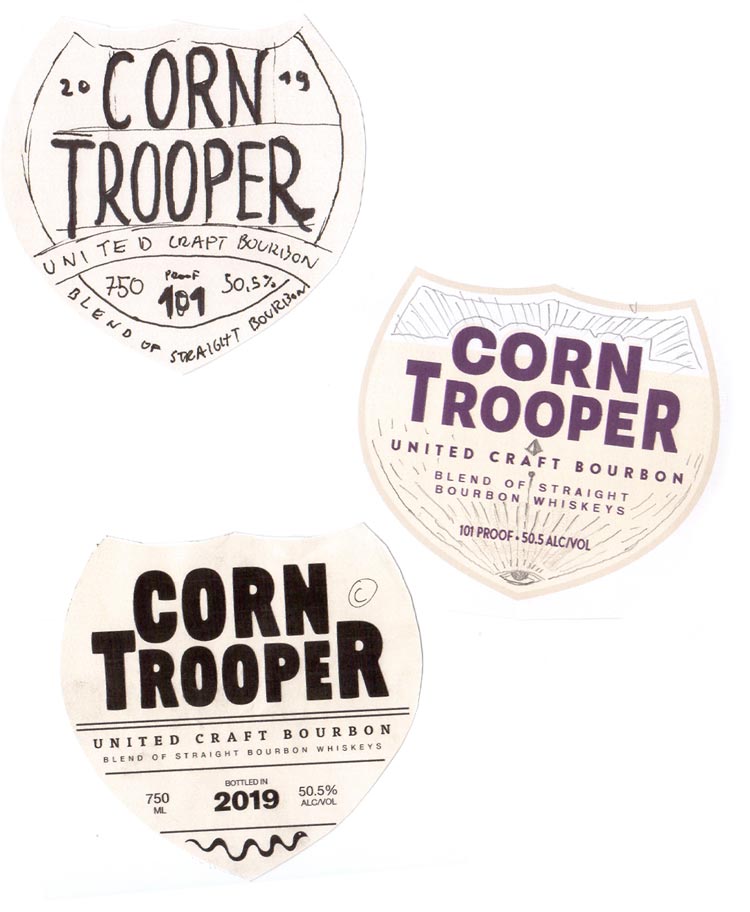 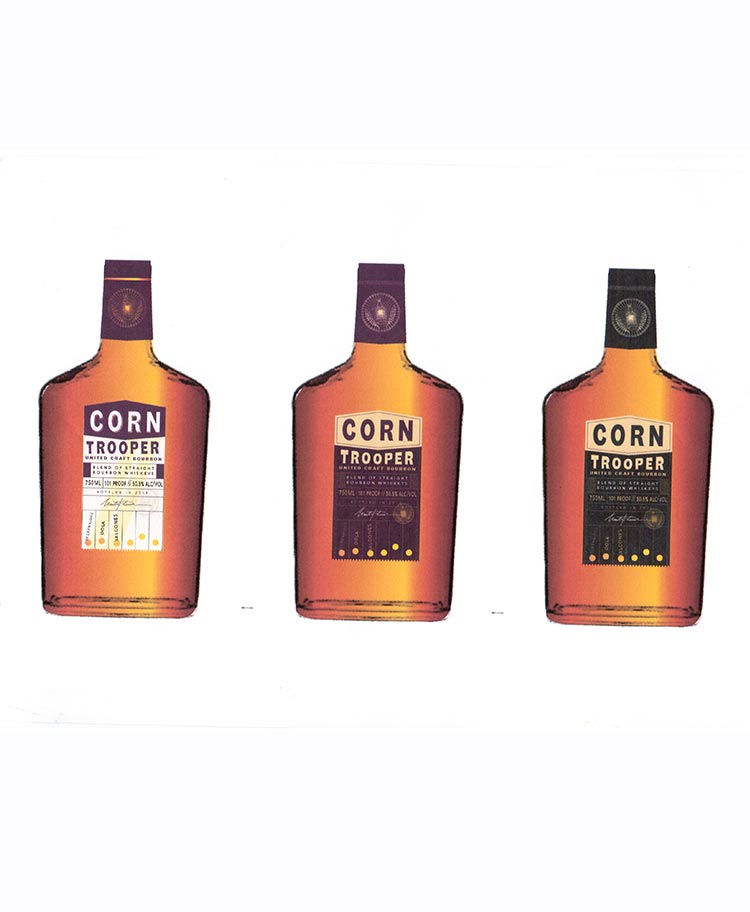 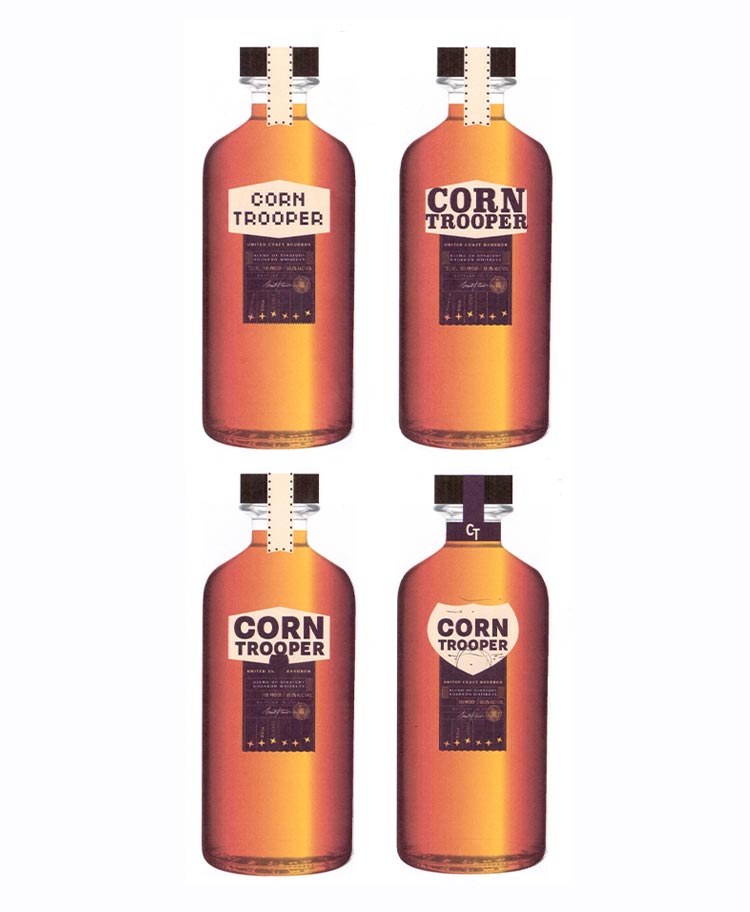 Then there’s the seal, which pays homage to the official Seal of the United States. While the latter represents both the nation’s unity and a willingness to defend it, Corn Trooper’s seal conveys harmony among the different Straight Bourbons in the blend and the idea of Corn Trooper as guardian of the Bourbon movement. Our team changed the American eagle to a corn-shaped dagger that’s holding an olive branch in one hand and arrows in the other. The arrows represent the first seven distilleries that came together to form the Union, bringing all of their strengths with them.

The ticket label is both nostalgic for old-school transit tickets and a shoutout to all the distilleries on Corn Trooper’s road trip. Each maker has its own punch hole. 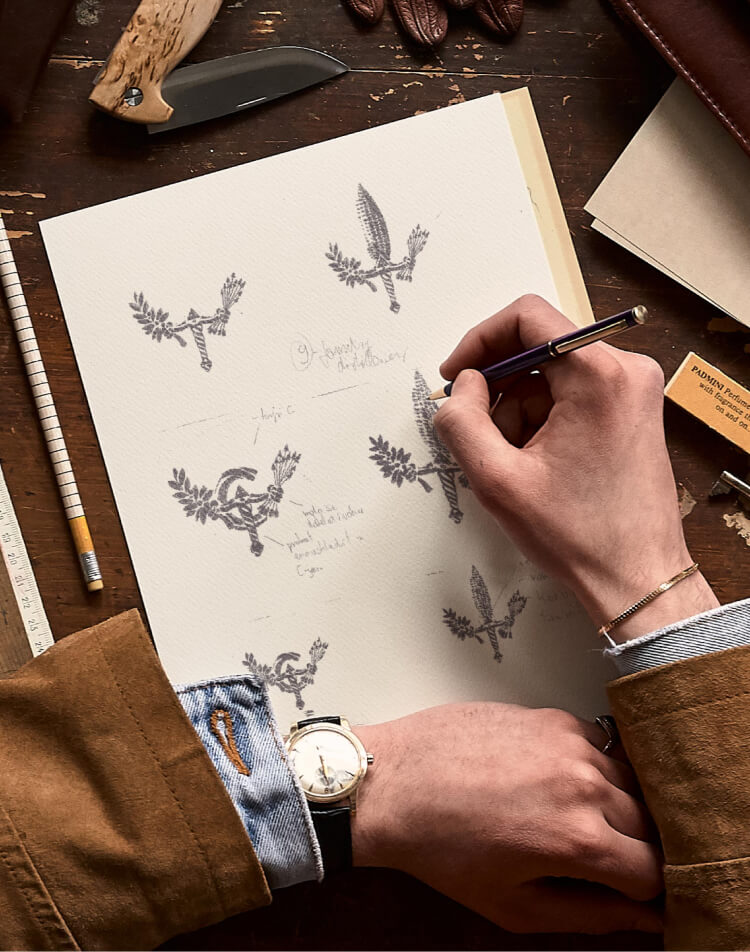 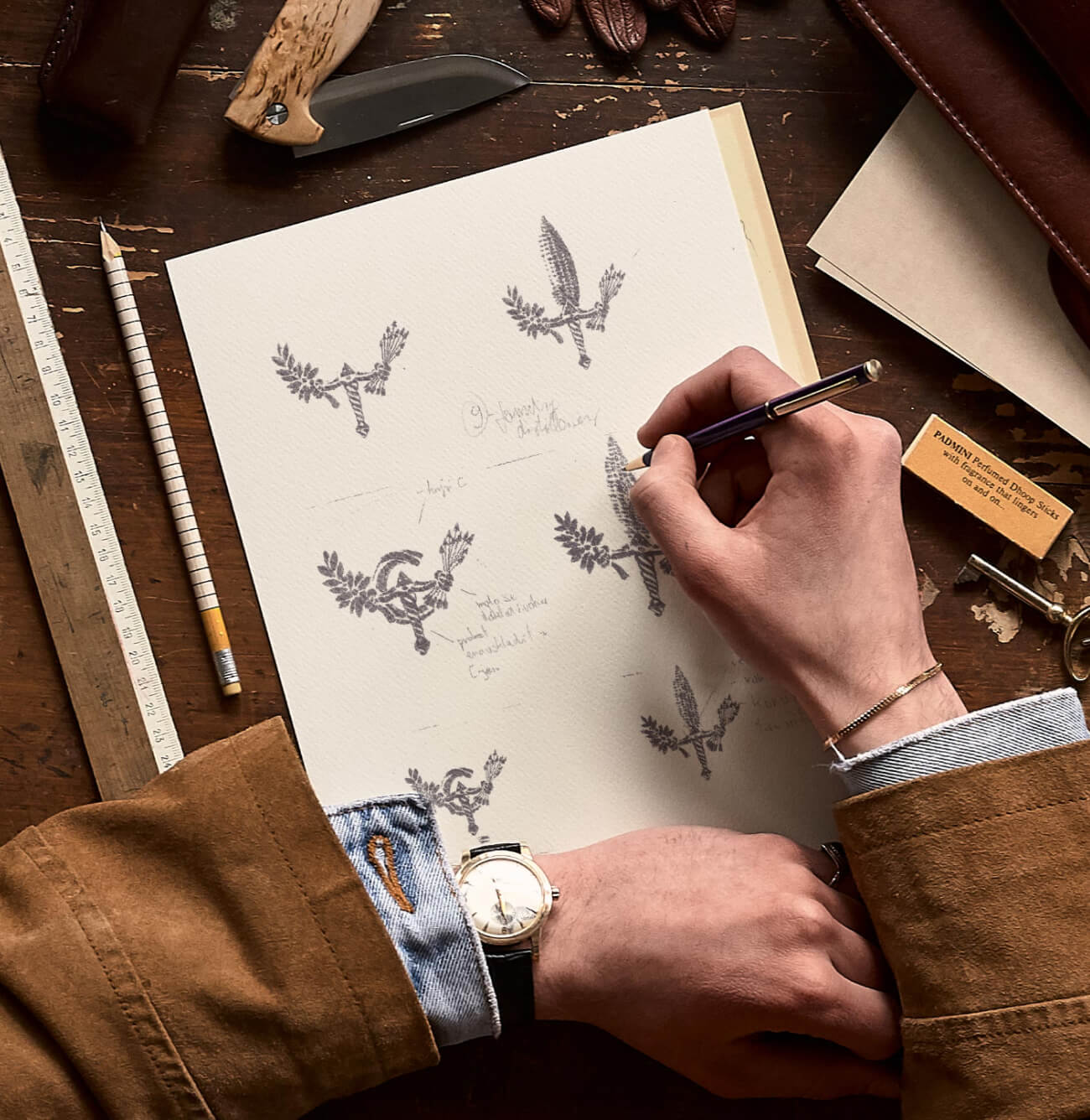 Stylized photo of the seal 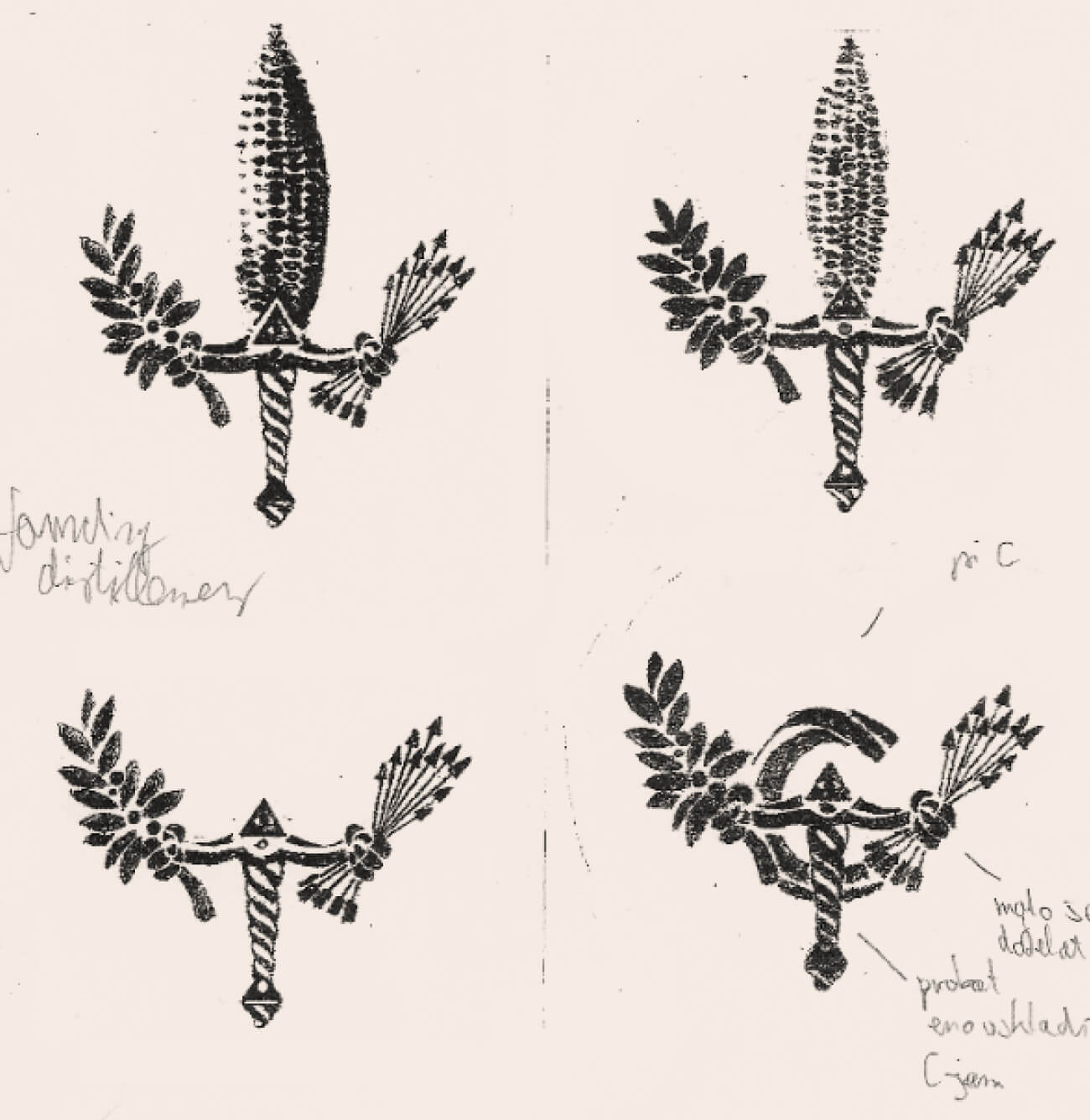 Process of refining the seal

In addition to the moniker and the visuals, the bottle is also an important part of Bourbon's identity. It is the vessel that holds the Spirit after all. We looked at different shapes of bottles and shapes of labels that would work together and produced tons of sketches.

When the team agreed on the interstate road sign shape for the label, and when 70% of the design was ready, we decided on the final bottle shape. It had to stand out and shout from the shelf that it holds Bourbon. We believe we found the perfect flask.

BEFORE IT RIDES INTO THE SUNSET

Corn Trooper is now available to everyone! Don't miss the opportunity to try the union of American flavors and grab yourself a bottle of Flaviar's first very own Bourbon while it lasts.